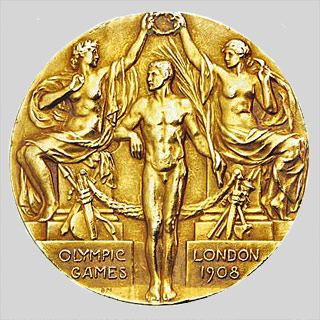 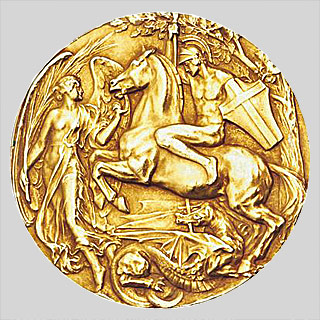 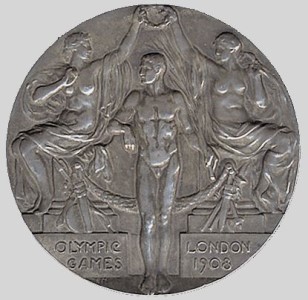 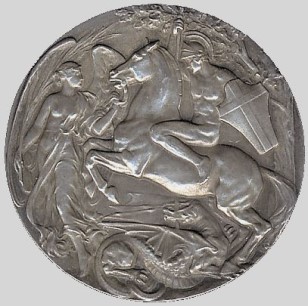 I. All Awards except Gold Medals.
As the Prize-giving involves five separate Divisions of Prize-Winners,
it is essential that the following instructions should be strictly
observed :
The holder of a prize ticket must walk up to receive his prize between
two flags of the same colour as his ticket, or he will not obtain the award
to which he is entitled.
He will only receive his prize in exchange for his ticket, which will be
handed to the official instructed to ask for it.
The number on his ticket not only indicates the exact prize won by its
holder, but also shows the order of the place he must take in the pro-
cession allotted to prizes of that kind.
Team Prizes will be taken by the Captain.
Challenge Cups will be given in the Red Division after the Gold Medals
have been distributed.


All winners of second and third prizes and of diplomas of merit, and all recipients of the special green cards for commemorative medals, will assemble on the east side of the Stadium, on the cycle track, opposite Block MM, and between Rooms 11 and 12.

The Band of the Grenadier Guards will play the National Anthems of all the foreign countries represented.

The Drums and Fifes of the Irish Guards will play the “Advance,” followed by a march.

The prize-winners mentioned above will advance across the grass to the cinder-path at the south-west comer of the Stadium, and from there along the cycle track to their respective prize tables, which will be arranged as follows, counting outwards from the Royal Box :

— Second-prize winners, holding dark-blue tickets, will advance between the dark-blue flags to the table of the same colour, at which Her Grace the Duchess of Rutland will distribute the silver medals, assisted by Mr. Sutherland, Mr. Fisher, and Mr. Boulger, members of the British Olympic Council, as her marshals.

Third-prize winners, holding yellow tickets, will advance between the yellow flags to the table of the same colour, at which Katharine Duchess of Westminster will distribute the bronze medals, assisted by Mr. Syers, Mr. Biedermann, and Mr. Hawes, members of the British Olympic Council, as her marshals.

Winners of diplomas of special merit will advance between the light- blue flags to the table of the same colour, at which the Duchess of Westminster will distribute the diplomas, assisted by Mr. Henry, Mr. Benjamin, and Mr. Richardson, members of the British Olympic Council, as her marshals.

Recipients of the special commemorative medals will advance between the green flags to the table of the same colour, at which the Lady Desborough will distribute the medals, assisted by Mr. Blair, member of the British Olympic Council, and Mr. Vaughton, as her marshals. The Drums and Bugles of the Irish Guards will sound the “Advance” as each of these processions start. The Band of the Grenadier Guards will play the National Folk Songs during the first part of the prize-giving.

When the National Anthem announcing the arrival of the Queen has begun, the winners of all first prizes will have been drawn up along the east side of the Stadium, opposite Block MM, on the concrete cycle track, between Rooms 11 and 12.

Immediately the 1,600 Metre Relay Race is over, the Band of the Grenadier Guards will play “See, the Conquering Hero Comes!” and the procession of first-prize winners will form up on the two tracks and cross the grass to the south-west comer of the arena, and when the Drums and Bugles of the Irish Guards have sounded the “Advance,” they will advance to the platform on the cycle track, beneath the Royal Box, where they receive the gold medals from Her Majesty the Queen, who will be attended by Lord Desborough, the members of the International Olympic Committee, the members of the British Olympic Council, and others.

On descending from the platform in front of the Royal Box, the winners receive their diplomas from Mr. George C. Drinkwater, O.U.B.C., and Mr. C. K. Philips, O.U.B.C., acting as marshals, with a sprig of oak-leaves from Windsor Forest, graciously sent by His Majesty the King, which will be handed to them by Lieutenant Norman Leith Hay Clark, Lincolnshire Regiment, acting as marshal, each sprig being tied with the Union Jack.

Her Majesty the Queen will then present her Gold Cup to Dorando Pietri.

Her Majesty the Queen will then present the following Challenge Cups to their winners, assisted by Mr. George Stuart Robertson and Mr. Theodore A. Cook, members of the British Olympic Council, as her marshals :

The Greek Trophy for the Marathon Race.
The Prague Trophy for Gymnastics.
The Montgomery Statuette for Discus.
The Prince of Wales’ Cup for Cycling.
The Hurlingham Club Trophy for Polo.
The Gold and Silversmiths’ Cup for Wrestling.
Lord Westbury’s Cup for Clay Bird Shooting.

The British Fencers’ International Challenge Cup for Epée Teams. Winners of the Challenge Cups and Captains of the winning teams, accom- panied by their teams, will advance to receive their cups at the signal of three bugles from the Irish Guards.

The Drums and Bugles of the Irish Guards will sound after the last cup has been given ; and prize-winners, having formed in line on the running- track in front of the Royal Box, will give three cheers for the Queen at a signal from Lord Desborough, after which the Band of the Grenadier Guards will play the National Anthem.