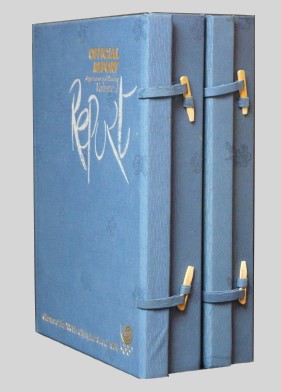 © 1988 by the Seoul Olympic Organizing Committee for the Olympic Games

The official records of the Seoul Olympic Games are the two volumes of tabloid official report and the 35-mm color official documentary film entitled Seoul, 1988 The official report was compiled in Korean (2,000 copies), English (2,000 copies) and French (1,000 copies). The first volume deals with the operation of the Games from the efforts to win the right to stage the Olympics to the conclusion of the Games and the post-Games management. The volume equivalent to 7,000 sheets of 200- letter Korean manuscript paper describes all the details with accompanying photos, figures and diagrams. The second volume covers competition results from all events in the 27 sports, including the official sports, demonstration and exhibition sports. The compilation of the official report was based on the collection of records on preparatory work, covering 10 volumes in five issues; the reports on the results of operations in each field; and some 230,000 pictures taken by a 30-member official photographer corps.

The official report of the Olympic Games is a document which describes in detail the planning, preparations and operation all the way from the effort to win the right to stage the Olympics to the operation of the Games, and the post-Games management. For the host country, the report carries the importance of a historic record and, in that respect, is of monumental value. It also serves as reference data for the host city of the next Games and future hosts. Rule 52 of the Olympic Charter stipulates that the official report, full and complete, compiled in the language of the host country, English and French, should be printed and distributed to the IOC within two years of the close of the Games. 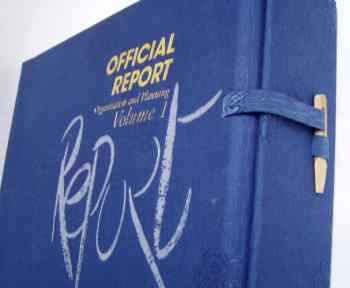