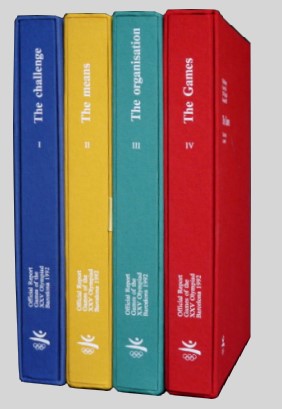 It must be admitted that the best and most thorough report of the Barcelona'92 Olympic Games is the one that each of us has stored away among our most intimate memories. No-one can conjure up this historic moment better than we ourselves with emotions, images or sensations. No chronicler could match the strength of our own experience. The true collective memory, as I understand it, is made up of thousands of hours lived and shared by thousands of people who will have thrilled to the Games, whether near or far away. Historians have already undertaken the task of researching, verifying, rationalising and interpreting the events. For the time being, the most genuine records are those of eye-witnesses. But the human memory, so powerful and suggestive, also has its lacunae. This is particularly true for the Olympic Games, where the poetry of the moment may cause it to miss a detail, overlook a fact or distort the measurement of time. I am convinced, therefore, that an official report is an indispensable complement to what will become an unforgettable episode in our life.

With this Report we fulfil the obligations of the Olympic Charter, but also an obligation to the people of the city and lovers of sport. If the stadiums and the roads are the tangible legacy, the publication you are reading now is the written monument to the Games of the XXV Olympiad. Any admirer of our city or the Olympics will be able to satisfy the need to know about all the details of this historic occasion in the pages which follow.

I recognise that the publication of this first volume of this Official Report before the Games are held may come as a surprise. This is not, of course, an exercise in clairvoyance. First, we wanted to show what we have always said: that the sixteen days of competition will be the climax of a process which has taken years and that many of our objectives -the reactivation of the city and the country, the town planning works, the boost to the economy- will have already been more than accomplished before the magic date. Furthermore, we would like to give the readers an opportunity to find out what has happened and to arouse their interest so that they can come to the Games with enough background information to have a better understanding of how and why they have been organised in a certain way.

Of Barcelona, of the history of the Olympics and the candidature for the Games of 1992 we can speak before the torch enters the Montjuïc Stadium. As for other matters, however, we shall have to wait until after the closing ceremony. We shall only be able to make a clear assessment of the resources -facilities, staff and equipment- when we have seen them in action. For the second volume, therefore, we shall have to wait until the operators have finished off the task that the planners, the workers and the fitters began.

The third volume is a similar case: we shall have to wait in order to appraise the efforts of hundreds of people, and especially of those most directly involved in the organisation, until we have the results. More than once the operation involved in the Olympic Games has been compared to a military campaign; and even if the objectives are quite incompatible, there are certain parallels. The logistical complexity is one, and the mission is not accomplished until the objective has been secured. The daily battles are important, but only the last one is decisive.

Allow me to make an observation which touches on moral ground. If we are capable of mobilising so many people and so many resources, of bringing together the youth so many countries, of capturing the attention of such different audiences, around such noble ideals, in a great festival of peace and youth, it means that we can have faith in the human condition. The energy and the enormous human potential that spring from the Olympic Games serve fundamentally for that purpose: to prove that people are still anxious to live moments of joy. The last volume of the Official Report we shall be keeping, with due devotion, for the true heroes and heroines: the sportsmen and women. The vast majority of spectators will remember Barcelona'92 for their idols: their sporting feats and their records. The quest for perfection, excellence and beauty will be immortalised in images that will travel around the world: the sportsmen and women will be the leading actors on the stage that, for two weeks, will be Barcelona and the Olympic subsites.

To explain the Games of the XXV Olympiad in four volumes, even long ones, is not easy. We shall include the essentials and I am sure that a few years from now we shall feel the lack of items ofinformation that might seem of slight importance to us today. But the  vital thing is the great work of compilation immediately after the Olympic event when the material is still fresh and the memory still clear.

The Barcelona 1992 Official Report will be the first one to be on sale to the public. So far the summary and analysis of the Games has been restricted to a select group of people and, in an abbreviated version, to the press. This time we wanted to round off the job with a piece of work which will be thorough, free of secrets and within the reach of everyone.

Ultimately, the Olympic Games would not be what they are without communication. Thousands of millions of people follow them on the small screen and without that enormous audience the sources of finance or the massive support which makes it possible to meet the cost would simply not be forthcoming. The event is interesting in itself, but so is the expectation it arouses. This communicative potential gives us the chance to broadcast our message loud and clear. It allows us to bring our way of living, our way of working and our way of understanding the relationships between people to the four corners of the earth. With the Official Report, we analyse the facts and the capacity of our organisation. But, most of all, we scatter to the four winds the enthusiasm of our people, which has been decisive, since the outset, in the will to offer the best and most universal Olympic Games in history.

Romà Cuyàs i Sol, Director of the Official Report

One of the commitments undertaken by the Organising Committee of the Olympic Games is to take charge of the publication of the Official Report. The Report has one essential purpose: to pass on to the managers of the Olympic Movement and future Organising Committees the experience acquired. As an additional benefit, it provides the Olympic Family as a whole with the results of the sports competitions. Furthermore, because they involve the whole world, the Olympic Games are the most complex and demanding event on the calendar. They are itinerant by nature, which means that the organising city is unlikely to have any previous experience. And so the Official Report which each Organising Committee leaves to its successors must be a reflection not only of the sporting event, which has already been thoroughly discussed and analysed by the media on the five continents, but also of each and every aspect of the organisation which made it possible and which only the Report can explain in the necessary depth and detail. It must therefore be an exhaustive, serious document from which future organisers can extract the maximum amount of information. But the Official Report of the Games of the XXV Olympiad is the first
one in history to be available to the public. This unusual element poses a new challenge to the people in charge of producing it: to make the explanation of the organisation of the Games interesting and enjoyable to a wide audience without sacrificing the seriousness and thoroughness demanded by the content.

Facing this twofold requirement, then, COOB'92 set to work on the Report about a year and a half ago. The first step was an exhaustive analysis of previous reports in terms of both structure and content, graphics and text. One of the first decisions was to shun the monumental in terms of extent and presentation; the dimensions chosen were intended to make for easier reading. The planned length was about one thousand five hundred pages spread over four volumes of similar length. This would make it possible to market it in serial form, with the added advantage that distribution could begin before the Games. This has meant that the Report itself is an element in stimulating public interest in the Games just a few months before they are held; such is the aim of this first volume which, as it covers the period of the Candidature, will be available before the opening ceremony. And so, as Josep Miquel Abad says in his introduction, the first volume will be "the climax of a process which has taken years", and the fruit of the labours of the whole city and the entire country. Moreover, the book explains the transformation of Barcelona since holding the Games there became more than just an idea.

As a contribution to the spread of the Olympics and bearing in mind that for the first time the general public has been included in the reading of an official report, COOB'92 has decided to introduce a chapter dealing with the history of the Games since their revival in 1896 to the Barcelona Games this year. The outstanding events of each one are listed and there are tables with the complete results of all the competitions in all the sports on the official programme in Barcelona. Thus the reader can follow the evolution of the scores and times achieved over the years and discover the highlights of each sport. A further contribution to Olympic knowledge is the glossary, which you will find in the appendices to this volume, which defines the terms found in the Olympic Charter or commonly used by COOB'92. The drafting of this first volume has involved a tremendous labour of documentation. The information has been taken, as far as possible, from the most reliable sources, the basis being the documents published by the Olympic Office and the branches of the administration which formed the consortium of the Managing Council during the period of the Candidature. The IOC archives have also been consulted, as well as those of the companies which make up HOLSA (AOMSA, VOSA and IMPU) and those so kindly placed at our disposal by the institutions of the COOB'92 consortium through the relevant organisations. Some private archives were also referred to when the need arose. Altogether the compilers have read over thirty thousand pages and looked at over ten thousand photographs. In the selection of the photographic material prominence has been given to the documentary and informative aspects. Moreover, the Report has benefited from the contribution of specialists from a wide range of disciplines -who have brought to our work an authority which it would not otherwise have had- and, as the drafting progressed, from the suggestions of all those closely involved with the Candidature.

The next volumes will concentrate on the planning, organisation and staging of the Barcelona Olympic Games. COOB'92 is already working on the compilation of the documents. We trust that this volume will live up to expectations and that in the future it will be a reference point for students of a period as thrilling and decisive in the history of the city and the country as these years of preparation for the Games of the XXV Olympiad.


CONTENTS, Volume I,  The challenge, From the idea to the nomination


CONTENTS, Volume III, The organisation,  The preparation of the Games