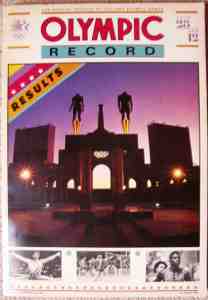 As part of its agreement as host of the Games, the LAOOC submitted an "Official Report" to the members of the IOC at its regularly scheduled sessions. These reports provided the IOC with updates on the status of the Organizing Committee's efforts. Generally, the reports contained updates in the areas of: accreditation, Arts Festival, ceremonies, customs, finance, facilities, government relations, housing, medical program, press operations, protocol, public relations, security, staffing, ticketing, transportation, village operations and youth programs. Distribution of these official reports adhered to the following timeline:

The final "Official Report" was compiled by a staff of some 15 editors and research writers along with a design director, office manager, photo editor, production manager and six administrative assistants. This staff gathered reports from each operating department manager and conducted personal interviews to gather background material before composing the chapters and sections of the report. Since the LAOOC made a commitment to terminate nearly all full-time employees at or soon after the conclusion of the Games, the "Official Report" staff was reassembled from existing full-time staff to begin work in September 1984. With a 39-chapter topic outline as its guide, the staff set out to produce their 1,586-page document in two parts: Volume One/ Organization and Facilities and Volume Two/Competitions. The brunt of the research and writing (in English) was completed by 15 January 1985 with translation into French completed by 1 May 1985.

A highly-respected Los Angeles design firm was awarded the contract to design and produce both volumes. In addition to the principal, who was directly involved in the project, the firm also utilized two project managers, three design coordinators, two production coordinators and a half-dozen production artists. Site drawings and charts were subcontracted to a local architectural graphics studio, which employed a team of up to 10 delineators. Keyboarding of manuscript was done in-house onto a micro-computer using word-processing software. The LAOOC transmitted data via modem to a local computer typesetting company for immediate output of final typeset text. This saved the time-consuming step of re-entering final text and allowed for quicker editing and proof reading by the "Official Report" editorial staff. The two-volume, hard-bound set was made available for purchase to an exclusive list of Olympic sponsors, supporters, staff members and ticket buyers, with a 31 January 1985 deadline for orders. Price of the oversized publication was set at $485 plus handling, shipping and applicable sales tax, bringing total cost to $550 in the United States and $600 for deliveries to foreign countries. An anticipated press run of 2,000 copies was revised accordingly based upon the number of sales orders received. The report was presented to members of the International Olympic Committee at its 90th Session (2-6 June 1985) in Berlin, German Democratic Republic, just nine months after the project was begun. General distribution to subscribers was completed by August 1985.

The "Official Report of the Games of the XXlllrd Olympiad" is an extremely large project which also requires a dedicated staff and a lengthy preparation period to produce a useful, lasting document. For the best results in compiling a report of this magnitude, a research/writing staff should be collected prior to the Games to finalize a table of contents while planning information is still meaningful and available. By beginning preparations for the "Official Report" early. heads of operating departments can be told which records and documents to keep for future research and publication. Given the time-sensitive demands placed on a very small staff, the Publications Department far exceeded the minimum requirements of the IOC and LAOOC and served the needs of their three principal clients: the Olympic Family, the media and the general public. It also served the needs of Olympic sponsors, suppliers and licensees. Overall, then, the publications produced by the LAOOC were colorful, well designed, informative and fully sufficient to meet the needs of those who received them. In the 18 months prior to the Games, the Publications Department met the requirements of operating departments whose own needs became apparent only a short time before final products were needed.